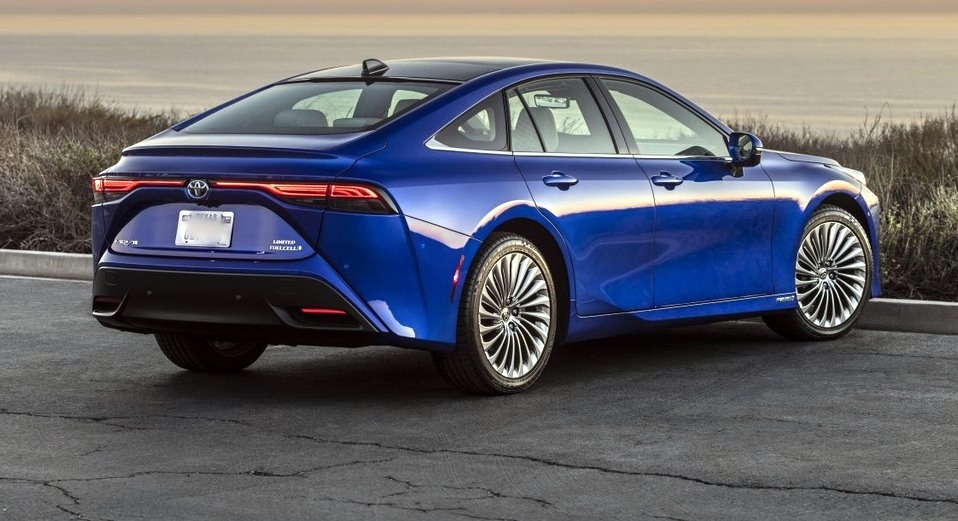 It is rare when we post a review of a car that is only available in one of the 50 United States, but such is the case with the 2022 Toyota Mirai hydrogen fuel cell electric vehicle (FCEV), which is only sold in California. Along with Hyundai and Honda who also have sold FCEVs, since 2012 there have been 14,225 fuel cell cars sold in the United States, nearly all of those in California.

Why are the numbers so low, and why only in California? It is all about the hydrogen fueling station network, which is slowly being built out. Hydrogen is used in many applications, such as forklifts in warehouses, transit buses, as rocket fuel for the U.S space program, and soon for large semi trucks plying the highways. But it has yet to catch on with consumers, which is no small thing as the state of California has spent more than $300 million since 2012 for consumer rebates, fueling stations, the purchase of transit buses and grants subsidizing the development of hydrogen-powered freight trucks.

Those lucky enough to live in California have the opportunity to own one of the nicest electric cars on the road. Powered by compressed hydrogen gas, the 2022 Toyota Mirai makes electricity onboard to drive the electric motor. No plugging in to an electrical outlet. Ever. The fueling process is fast and easy and a FCEV operates exactly like a gasoline-powered car, but with no noise, exhaust fumes or emissions.

The electric power comes from oxygen being introduced to a fuel cell filled with compressed hydrogen gas. Through a chemical process, electricity is created to power the motor and charge the lithium-ion battery (in Toyota’s case, not all FCEVs use battery storage). The by-product of this chemical reaction is water vapor that harmlessly drips from the tailpipe, making the Mirai a zero-emission vehicle. Here are the important propulsion details.

Note: MPGe, or miles per gallon equivalent, is a measurement of how efficient a car powered by electricity is, using the same amount of energy as is contained in one gallon of gasoline.

The Most Luxurious Toyota

When Clean Fleet Report reviewed the first generation Toyota Mirai (see reviews at the end of the story), we weren’t all that excited about the look, but did like the way it handled freeway driving and quickly realized it was nothing exciting/fun to drive.

The 2022 Mirai, based on the Lexus LS platform, is a completely different story. It is the best-looking and most luxurious Toyota. With the second generation Mirai (fully redesigned in 2021) makes a giant leap into respectability for exterior design, interior comfort, driver safety systems, and the ability to go up to 400 miles on a tank of hydrogen. Another big difference from the earlier Mirai is it is now rear-wheel drive, a significant change that improves the handling and ride.

Clean Fleet Report drove the 2022 Mirai 232 miles through Southern California. The dash gauge at the beginning of our driving read 234 miles of estimated range, but when we finished there were 82 miles remaining. Simple math says we possibly could have driven 316 miles, which is just 36 miles shy of Los Angeles to the Silicon Valley.

The Mirai’s electric drive system produces smooth linear acceleration with 0-60 times in about nine seconds, which is not fast as far as electric cars go, but certainly quick enough to merge onto highways and pass big rigs.

The performance was so good, with a near silent driving experience from the hydrogen-powered electric motor, it was easy to forget a science project was taking place under the hood. To maximize performance, electricity consumption and driving range, the Mirai has regenerative braking that converts kinetic energy into electric energy and stores it in the battery when applying the brakes or coasting. There are three driver-selectable drive modes of Eco, Normal and Sport. On the open road Eco is the place to be, Sport is for a more responsive accelerator and a quicker steering, resulting a better road feel, while Normal is a combination of the two.

Handling was seriously improved over the first generation Mirai, to the point you will want to seek out corners and curves testing the front and rear multi-link suspension and the ventilated four-wheel discs and anti-lock brakes. The move to rear-wheel drive, a 50/50 weight balance, the motor and hydrogen fuel tanks being placed low to the ground, and Active Cornering Assist all contributed to what is a respectable, fine-handling sedan.

The Mirai is the best-looking Toyota sedan and looks great from any angle. The Lexus design cues take the Mirai upscale, which poses the question—why is it not part of the Lexus line? Toyota says the Mirai is a car for everyone, and not just a luxury car. The consumer wins on this point, being able to own a Toyota with a Lexus hidden underneath.

The interior has top-level Toyota design elements found on their other cars, trucks and SUVs. Every creature comfort is available, including leather, power everything, excellent sound systems and, on the Limited model, rear side window shades and a power rear window shade. The standard and available advanced driver assist systems (ADAS) is extensive and include the latest safety technology.

Seating is listed for five, but the back seat is tight for adults. The SofTex-trimmed power front seats are heated and ventilated, with the driver getting memory. SofTex, a synthetic leather seat material designed for wear, easy cleaning and resisting spills, weighs about half as much as genuine leather and is soft to the touch.

The fueling process itself is pretty straight forward and simple. If you can fill a tank with gasoline, then you will have no problems with hydrogen. Once at the station, the fueling process is explained through a video that plays on the pump with step-by-step instructions.

Quick lesson: The nozzle notches into the car, followed by the twisting of a handle to lock the nozzle in place. It can be a bit tricky, be patient, it will eventually fit. If there are two pressure options on your pump, you always want to select 70 Bar, which is 10,000 psi. The filling will start and stop for a few seconds at a time, but a complete fill is under five minutes. When removing the nozzle you will notice it is cold. This is because the hydrogen gas is cooled to right around zero degrees Fahrenheit to increase the hydrogen’s density, which results in more gas filling the tank. That’s it!

The 2022 Mirai comes in two models. These prices include the mandatory $1,095 delivery, processing and handling fee.

The Mirai currently qualifies for federal and California state tax credits that could reduce your final cost and comes with a pre-loaded debit card with up to $15,000 of complimentary hydrogen.

Another perk is the complimentary Toyota rental, for up to 21 days, during the first three years of ownership. This great benefit is important if there comes a time when you are planning a family vacation that takes you away from the hydrogen fueling station network.

And if all that isn’t enough incentive to give hydrogen a look, the Mirai qualifies for California’s coveted car pool sticker, allowing the driver to use the HOV lane solo. This is no small thing when trying to get anywhere on a freeway in the California.

While consumer ownership of a hydrogen fuel cell vehicle has been proven to be safe and reliable, there still are a couple unique considerations to owning a Mirai. It is only sold in California at 10 dealers with five each in Northern and Southern California, and those dealers are grouped in heavy population areas. The electric driving range now exceeding 400 miles means you don’t necessarily need to live near a dealership as long as you always pay close attention to your hydrogen consumption and driving range, which are clearly displayed on the dash gauges.

In the Golden State there currently 54 public hydrogen fueling stations, with another 42 either under construction, in the permit stage or proposed. It is important to always refer to this website that shows which stations are online and operating.

The 2022 Toyota Mirai drives and handles like any other car, actually better than many other cars, has the performance of an electric car (which it should because it is an electric car) and gets stellar, emission-free fuel economy. If you are comparing it to an electric car, then it has the advantage of refilling the full driving range (357-402 miles) in a matter of minutes as opposed to possibly hours for an electric car. Hydrogen costs the equivalent of $16 per gallon of gasoline, which is why the fuel incentive offered by Toyota is so valuable.

Toyota is makes a strong case for the hydrogen-powered Mirai to be sitting in your garage, but only if it fits your lifestyle and driving pattern. The last thing they want is a customer that doesn’t understand hydrogen technology, who then becomes a dissatisfied owner.

If you are considering buying a midsize sedan, no longer want to be tethered to the gasoline umbilical cord, then quite possibly a Mirai could be a good fit. Go into one of the 10 California Toyota dealers that are experts on the Mirai, and learn if this unique car is right for you.

Make sure to opt-in to the Clean Fleet Report newsletter (top right of page) to be notified of all news stories and vehicle reviews.

Our previous experience with the Mirai & other H2 vehicles.

Clean Fleet Report is loaned free test vehicles from automakers to evaluate, typically for a week at a time. Our road tests are based on this one-week drive of a new vehicle. Because of this we don’t address issues such as long-term reliability or total cost of ownership. In addition, we are often invited to manufacturer events highlighting new vehicles or technology. As part of these events we may be offered free transportation, lodging or meals. We do our best to present our unvarnished evaluations of vehicles and news irrespective of these inducements.

Our focus is on vehicles that offer the best fuel economy in their class, which leads us to emphasize electric cars, plug-in hybrids, hybrids and diesels. We also feature those efficient gas-powered vehicles that are among the top mpg vehicles in their class. In addition, we aim to offer reviews and news on advanced technology and the alternative fuel vehicle market. We welcome any feedback from vehicle owners and are dedicated to providing a forum for alternative viewpoints. Please let us know your views at publisher@cleanfleetreport.com.