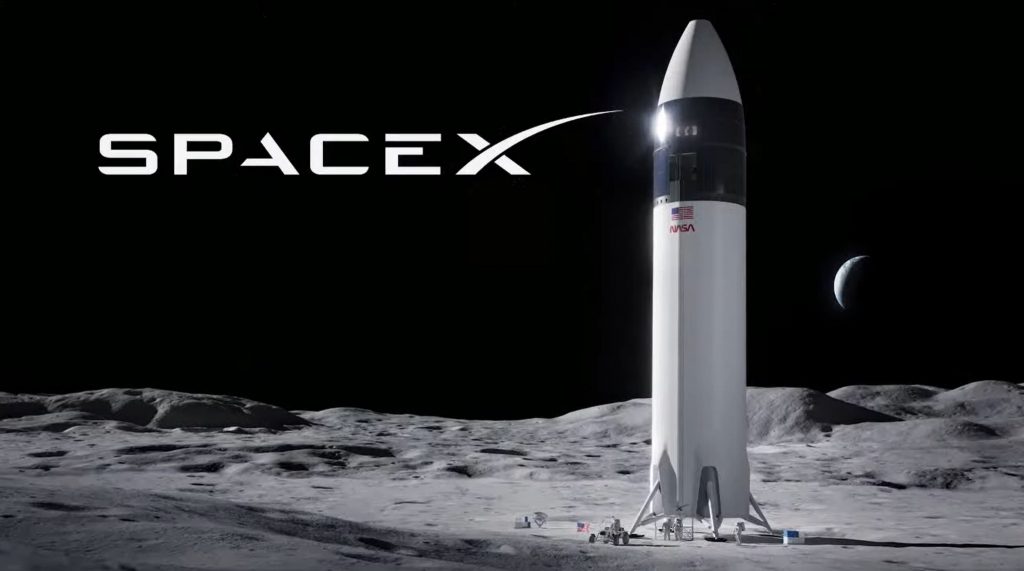 In one of the biggest NASA contracting surprises in years, the space agency has chosen SpaceX – and only SpaceX – to return humans to the surface of the Moon with its next-generation Starship rocket.

The Washington Post’s Christian Davenport broke the news a few hours before NASA’s scheduled announcement and teleconference, revealing that SpaceX beat out Dynetics and a Blue Origin-led “National Team” for a sole-source contract to build, launch, and land a custom version of Starship on the Moon for $2.94 billion. If that uncrewed testing is successful, SpaceX and Starship will be tasked with landing the first astronauts on the Moon in half a century as early as the in the mid-2020s.

While a Human Landing System (HLS) announcement was fully planned and expected to happen this month, virtually everyone following the process believed that NASA would continue to lean on the rationale behind selecting multiple providers for its Commercial Resupply Services (CRS) and Commercial Crew (CCP) programs. Having multiple distinct providers, spacecraft, and rockets available to accomplish the same tasks fundamentally insulates NASA (and the International Space Station that depends on those programs) from losing the ability to transport crew or cargo in the event that any one provider is delayed or suffers a major failure.

With a goal as complex as landing humans back on the Moon for the first time since the 1970s, redundancy and multiple distinct solutions would obviously be even more desirable. Entirely contrary to expectations, NASA instead announced that it had exclusively contracted with SpaceX alone for next phase of HLS development. Though SpaceX may have been the only competitor already testing something approximating real integrated flight hardware, NASA’s decision to sole-source HLS to Starship represents a significant gamble.

Simultaneously, though, the move is also extraordinarily pragmatic and indicates that one or several major decisionmakers at NASA have taken less positive lessons from its commercial cargo and crew programs to heart. Crucially, over the first several years of the Commercial Crew Program (CCP), Congress systematically underfunded the development of two commercial crew spacecraft – one from Boeing and the other from SpaceX. As a direct result, the launch debuts of both spacecraft were delayed by several years, forcing NASA to to continue relying on Russian Soyuz launches well into the 2020s to get its astronauts to the ISS.

Additionally, SpaceX – an unequivocal underdog and newbie next to Boeing in the mid-2010s – has drastically outperformed its traditional aerospace counterpart, beating Boeing to the punch and launching astronauts first. Boeing’s Starliner is now at least 18 months behind Crew Dragon despite costing almost 60% more.

In its first year on the books, almost mirroring NASA’s Commercial Crew experience, Congress aggressively underfunded the HLS program, allotting $850M – just 25% – of the $3.4B NASA requested. In other words, NASA seems to be proceeding with HLS under the assumption that Congress – as it did with CCP – will continue to chronically underfund the lunar lander program for years to come. If that’s the case, NASA appears to have made an uncharacteristically astute decision to structure HLS not on its preferred budget – but on what the agency believes Congress will pony up.

Put in a slightly different way, NASA is basically telling Congress that its lack of commitment has forced the agency to sole-source its lunar lander contract to SpaceX, putting the impetus on Congress to properly fund the HLS program if it wants redundant providers. All told, while NASA is undoubtedly taking a risk selecting SpaceX and Starship to return both it and humanity to the Moon, the space agency has now made it abundantly clear that it’s fully committed to the program and goal, whether or not Congress is willing to do its job.