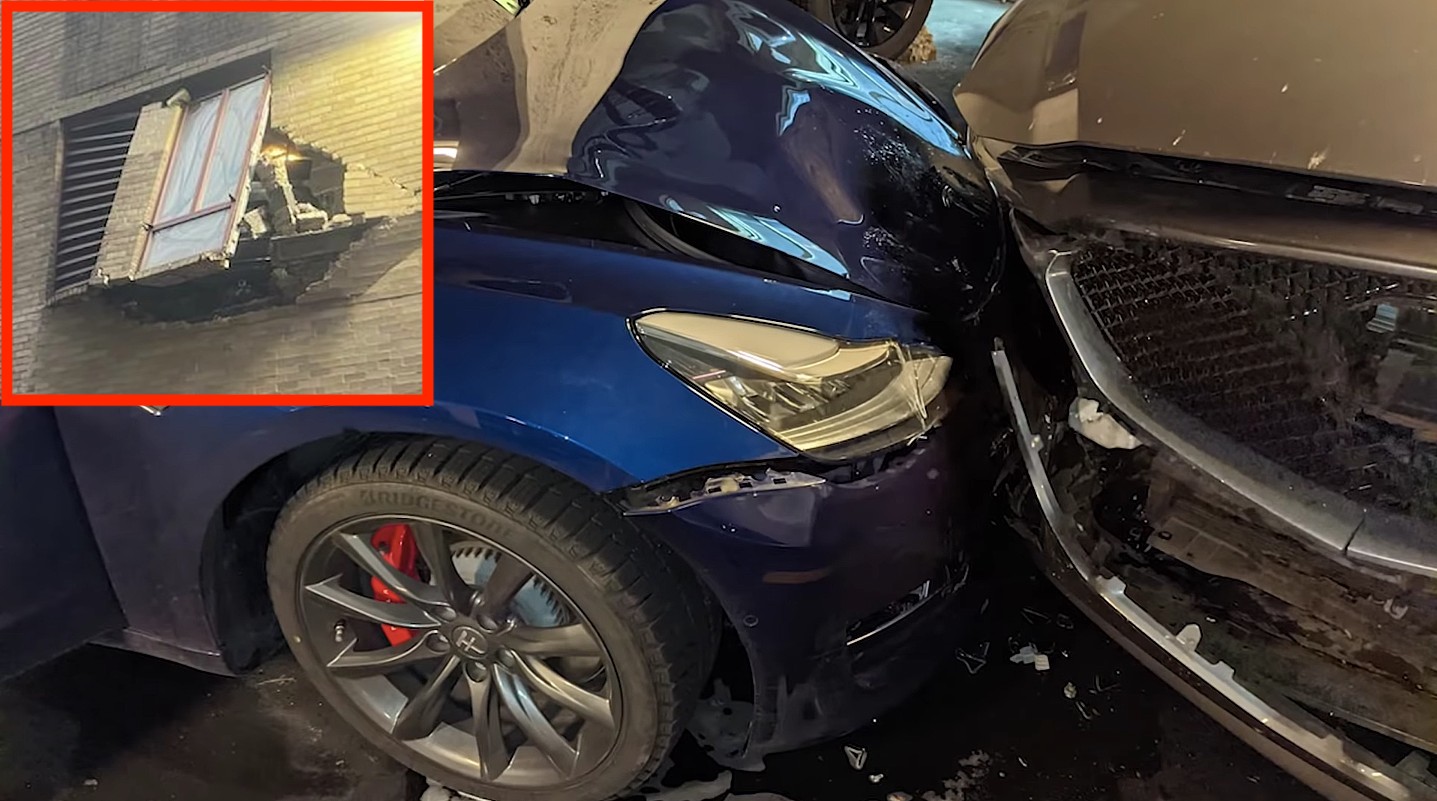 A Tesla owner has found himself in the middle of a battle worth over $100,000 in property damages after his Model 3 Performance crashed while being driven out of a valet parking garage. Despite being in the right and having the evidence to back up his claims, the Tesla owner has ended up in an uphill battle that could last for some time.

From Routine to Horror

It was supposed to be a routine process. After having his Model 3 parked at a multi-story garage, the Tesla owner asked for his vehicle to be returned to him. A valet then went on to retrieve the Model 3 from its parking spot. A Teslacam video of the valet driving the vehicle showed that everything seemed normal, despite the parking garage employee driving a bit fast in such a cramped space.

Moments later, the Tesla owner was shocked as part of the parking garage’s second-floor walls came crashing into the sidewalk below. Images taken by the electric car owner after the incident revealed that a vehicle had been partly pushed through the parking garage’s brick walls. Fearing the worst, the Tesla driver ran up to check on the valet and his Model 3.

What he saw confirmed his fears. Smashed against two vehicles was his blue Tesla Model 3 Performance, its front end crushed as it collided with other parked cars.

As the valet stumbled out of the Model 3, he promptly claimed that the Tesla suddenly engaged Autopilot and drove itself into the other vehicles. The valet was not joking.

While those inexperienced with Tesla’s tech may find it easy to blame Autopilot to avoid accountability when something terrible happens, those familiar with the driver-assist system know that Autopilot could not be engaged in a number of places. One of these is, of course, a multi-story parking garage. The Model 3 owner then knew something was amiss when the valet told him that “Autopilot” suddenly drove the Tesla into the other vehicles.

The parking garage company claimed innocence by stating that the incident was caused by “unintended acceleration” on the Model 3’s part. The company refused to budge, and the Tesla owner decided to fight all the way. Being familiar with how Tesla stores its vehicles’ data, the Model 3 owner decided to gather so much evidence that there will be no way his insurance company could lose the case.

The Hunt for Evidence

In cases such as these, which involve a party claiming unintended acceleration through “Autopilot,” it is always best to have a Tesla’s Event Data Recorder (EDR) report. The EDR is like the car’s black box, recording everything that has happened in the vehicle. Everything, from the driver’s weight, the vehicle’s speed, which pedals were pressed, and how far they are pressed, could all be determined in the EDR report. The Model 3 owner then contacted Tesla for help in retrieving his car’s records.

Much to his chagrin, Tesla refused, citing legal reasons because he lives outside of California. In a statement to YouTube channel Wham Baam Teslacam, the Model 3 owner remarked that he is not really sure why Tesla refused his request, though he thinks that if it were his lawyer that contacted the electric car maker, the results would have been different. Disappointed but not deterred, the Model 3 owner ended up hiring an EDR technician to retrieve his Tesla’s report. The move cost him $1,300.

The EDR report was damning. A look at the data from the Model 3 showed that the valet was not even wearing a seatbelt while operating the Tesla. The vehicle was also moving reasonably fast for a car being driven out of a multi-story parking garage. But even more importantly, the EDR showed that the valet had applied 100% pressure on the accelerator and 0% pressure on the brake pedal all the way up to the crash. With this data, the Model 3 owner figured that he could ultimately prove that the parking garage’s unintended acceleration claim was untrue.

But despite the mountain of evidence provided by the EDR report, the parking garage company decided to dig their heels in the sand and stand by their claim of unintended acceleration. The Model 3 owner’s insurance company has paid out on the multiple claims for the damages that resulted from the incident and have pledged to reimburse him after litigation is finished. But that process could take quite a while.

The incident resulted in $24,000 worth of repairs to the Model 3 Performance. Adding on the damages for the other vehicles involved in the incident and the actual damages to the multi-story building itself, the total cost of property damage from the crash is estimated to be far beyond $100,000.

Ultimately, the Tesla owner’s experience with the parking garage highlights two notable things. One, parking garages and valets should know that it’s tough to lie about what one does in a Tesla since data from the EDR would most definitely show the truth. And second, Tesla’s service has a lot of space for improvement, so owners who approach the company for help after such a harrowing, aggravating incident would not be turned away. An EDR request, especially one by an owner involved in an accident, is better off approved, after all.

Watch Wham Baam Teslacam‘s feature on the remarkable incident in the video below.