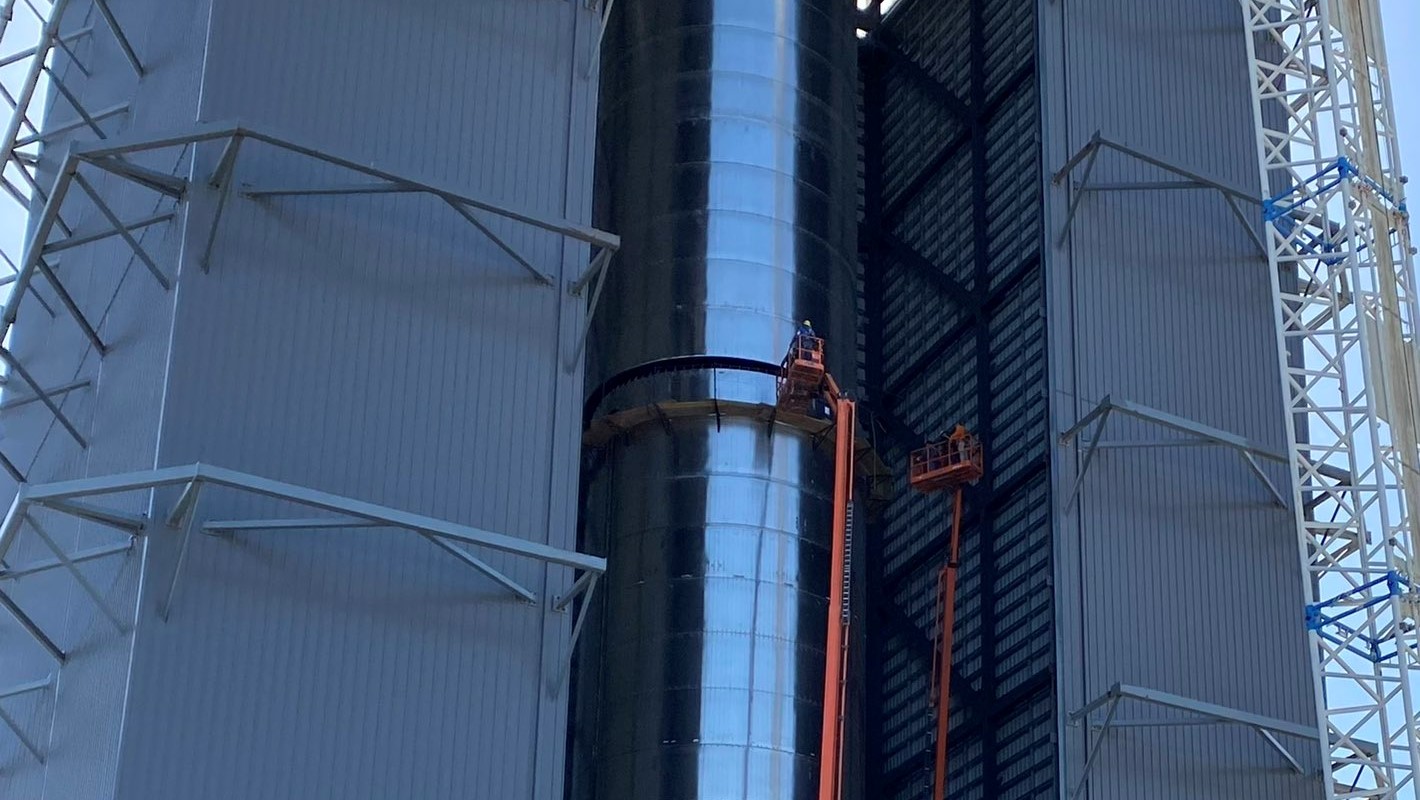 For the first time ever, SpaceX has stacked a Super Heavy tank section to its full height, effectively completing assembly of the largest rocket booster ever built.

While a good amount of work still remains to weld the two halves together and connect their preinstalled plumbing and avionics runs, those tasks are largely marginal and will tweak the massive steel tower that’s now firmly in one piece. Comprised of 36 of the steel rings also used to assemble Starships, the first Super Heavy prototype – serial number BN1 – will stand roughly 67 meters (220 ft) tall from the top of its uppermost ring to the tail of its soon-to-be-installed Raptor engines.

At that height, Super Heavy BN1 is just 3 meters (~10 ft) shorter than an entire two-stage Falcon 9 or Falcon Heavy rocket – the second and third tallest operational rockets today. Of course, Super Heavy is just a booster and SpaceX says the rocket will stand at least 120m (~395 ft) tall with a Starship upper stage and spacecraft installed on top, easily making it the tallest (and likely heaviest) launch vehicle ever assembled.

Notably, Super Heavy BN1 isn’t fully representative of the boosters that will support Starship’s first orbital launch attempts. For unknown reasons, SpaceX appears to have forgone the installation of any kind of landing legs on the first pathfinder and prototype. CEO Elon Musk has expressed a desire to avoid the need for legs entirely by catching Super Heavy boosters (and possibly even Starships) with a tower outfitted with giant arms, but it’s virtually impossible to imagine that such a wholly unproven recovery mechanism will be ready for full-scale testing – let alone operational use – later this year.

First reported by NASASpaceflight and later confirmed by Musk himself, SpaceX hopes to be ready to begin orbital Starship launches as early as July 2021, just four months from now. Per NASASpaceflight, that first launch attempt will nominally use Super Heavy booster BN3 and Starship SN20. Super Heavy BN1 is expected to remain grounded, serving as a testbed for inaugural pressure and proof tests, as well as one or several possible Raptor static fires (Update: confirmed by Musk).

If that process goes according to plan, Super Heavy BN2 will pick up where BN1 leaves off and attempt at least one short hop test, among other qualification tasks. In the interim between that feat and Super Heavy BN3’s launch preparations, it’s safe to assume that either BN2 or BN3 will support some kind of iterative static fire test campaign similar to what SpaceX once did with Falcon 9, gradually building up from tests with a half-dozen or so engines to static fires with 20 or more – possibly up to and including a full complement of 28 Raptors.

The first of its kind, booster BN1’s ‘thrust donut’ – a donut-shaped plate for the rocket’s center cluster of Raptor engines to attach to – appears to have been outfitted with hardware for four engines, suggesting a ceiling for static fire tests. It’s unclear when Super Heavy will roll to the launch pad for testing but it’s safe to say that SpaceX probably wont wait long after Starship SN11 is done with its high-altitude launch campaign. Stay tuned for updates!