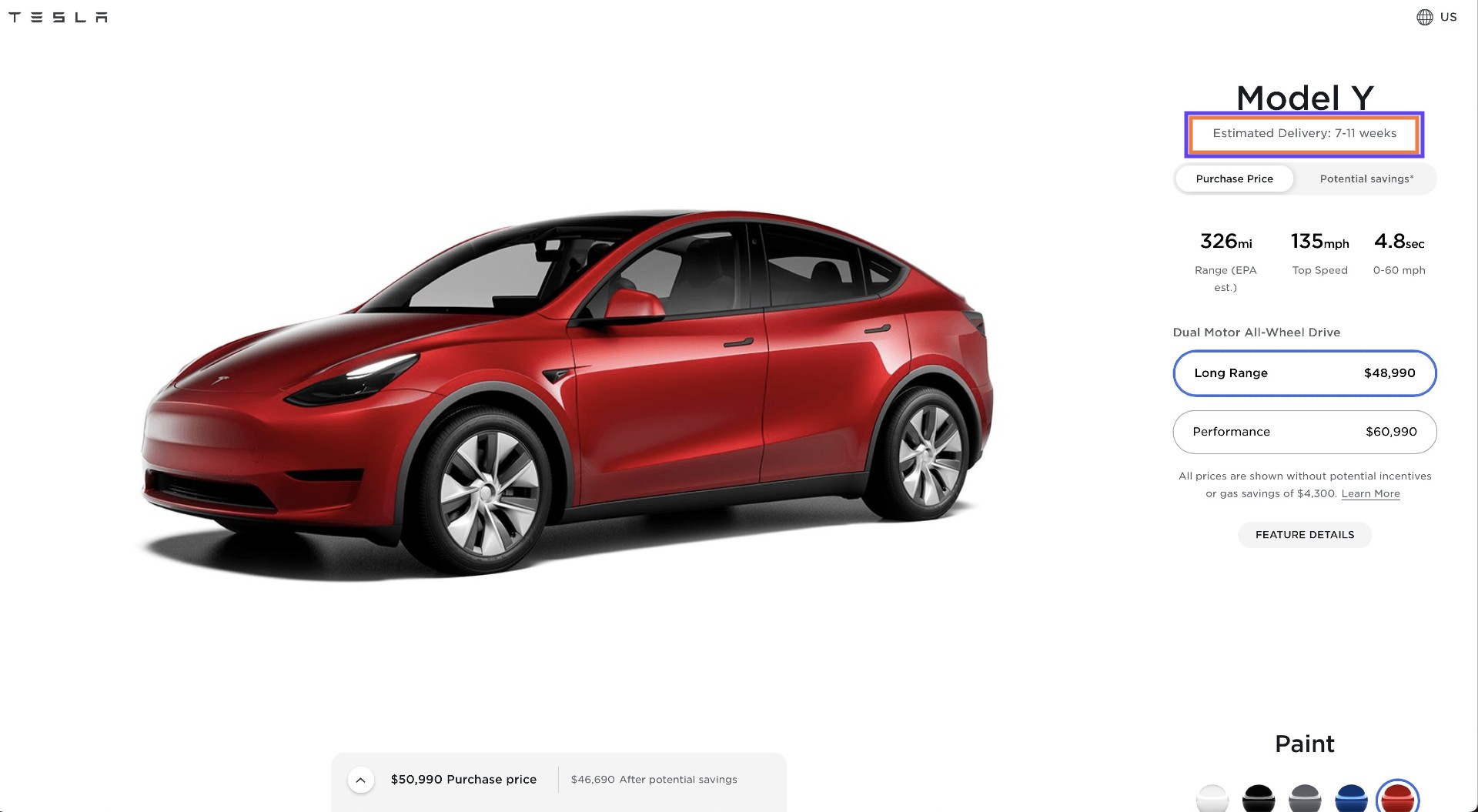 The Tesla Model Y crossover will arrive at customer driveways slightly later than expected after the company updated its delivery timeframe from 2-5 weeks to 7-11 weeks.

Tesla’s United States Design Studio that is available on the automaker’s website now displays an updated timeframe. Interestingly, Tesla recently updated its Model 3 delivery timeframe from 3-5 weeks to 2-4 weeks as the end of Q1 2021 approaches. Tesla is known for performing drastic End of Quarter pushes to increase delivery and production figures on its Update Letters and Shareholder Decks.

BREAKING: All US Model Y estimated delivery dates have increased from 2-5 weeks to now 7-11 weeks. pic.twitter.com/BhluUIzESJ

It is unknown what the cause of the delay is, but there are several recent events that could be the point of reason for the delay in deliveries. Firstly, Tesla plans to make its Model Y line at the Fremont Factory permanent, as documents obtained by Teslarati revealed several weeks ago. The line, known as General Assembly 4.5, is located in a sprung structure just outside of the main Fremont building. It was implemented as a temporary structure in February 202, but Tesla is now planning to make it permanent. The documents revealed that underground utilities and foundations need to be implemented, which could cause a slight delay in production for the Y, hence the delayed deliveries.

Additionally, Tesla’s Fremont Facility was also closed entirely several weeks ago, citing a parts shortage for the delay. After being closed on Monday and Tuesday, Fremont reopened on Wednesday, and production was up to normal rates within several days. However, it is doubtful that Fremont’s parts shortage and subsequent shutdown are still causing delays of this stature.

The final reason for the delays could be Tesla dealing with a backlog of demand that has extended delivery times months into the future. The Model Y is an affordable Tesla model that equips the highly-popular crossover body style, which has a sedan’s sportiness but the space of an SUV. Tesla expects the Model Y to overtake the Model 3 in popularity, and it has already done that in several markets, including Tesla’s home state of California. Tesla may be dealing with increased demand for the Model Y in the United States, which could very well be the reason for the delay.

Tesla currently produces the Model Y in Fremont and Shanghai, with plans to expand production to two new Gigafactories that will be completed later this year: Giga Texas in Austin and Giga Berlin in Germany.