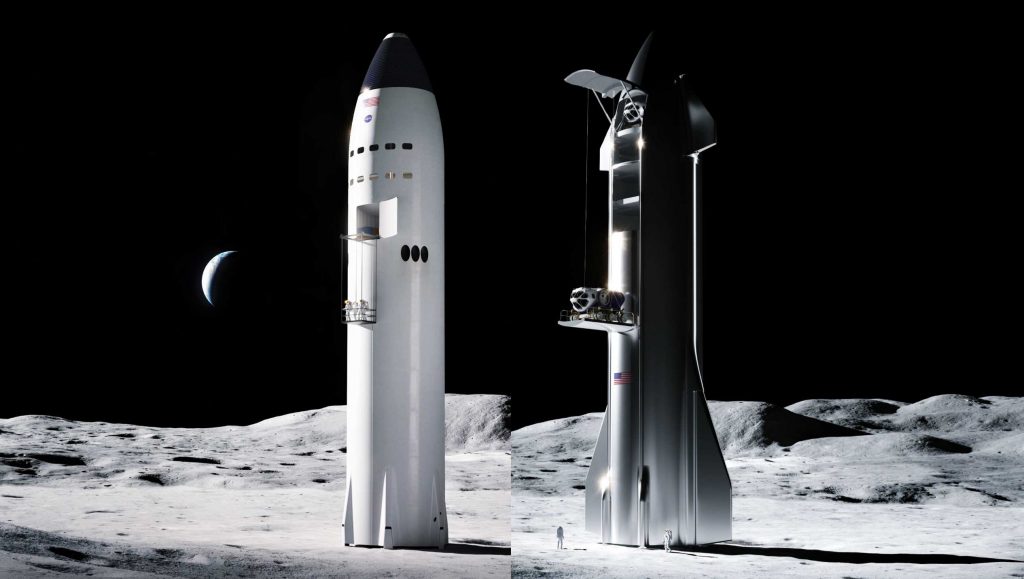 As part of a NASA program that will select one or two commercial crewed Moon landers, SpaceX is busy testing Starship and prototyping hardware and most recently built and demonstrated an elevator “in a very short period of time.”

Known as the Human Landing System (HLS) program, NASA selected three providers – a Blue Origin-led consortium, Dynetics, and SpaceX – to build prototypes and compete for one or two follow-on contracts back in April 2020. SpaceX’s Starship offering was deemed the riskiest solution and the company received a middling $135 million to Dynetics’ ~$250 million and the “National Team’s” ~$570 million.

For their ~$820 million investment, it’s unclear what exactly NASA has gotten from its two best-funded teams aside from paperwork, a few completed design reviews, and two low-fidelity mockups mostly made out of cardboard, foam, and wood. Meanwhile, in the ten months since SpaceX received its $135 million, the company has built no less than eight full-scale Starship prototypes, performed a dozen or more wet dress rehearsals and static fires with said prototypes, and performed two powered hops and two high-altitude test flights. Now, to add to that list of low-cost achievements, SpaceX has also built and tested a functioning prototype of the elevator Starship would use to lift and lower astronauts to and from the lunar surface.

SpaceX’s proposal is certainly a unique one, with Starship being no less than several times taller and heavier than both its prospective competitors. However, Blue Origin’s extraordinarily complex three-stage, four-component lander – requiring a separate transfer stage, descent stage, ascent stage, and crew cabin – makes even Starship seem somewhat reasonable.

Notably, that massive 8-10m (25-32 ft) stack of separate spacecraft – crew cabin at the peak – would force NASA astronauts to transit a several-story ladder to and from the lunar surface. Far taller than the Apollo Program’s lander ladder, which NASA was already somewhat tepid on at the time, navigating a tall ladder in a clumsy, imprecise lunar EVA spacesuit would be extremely challenging and relatively risky. Dynetics is by far the least concerning solution in that regard, requiring what amounts to a footstool relative to SpaceX and Blue Origin.

In the National Team’s defense, SpaceX’s elevator approach is also undeniably risky, and it’s safe to say that demonstrated reliability would be an absolute necessity for NASA to ever accept that solution. Of course, SpaceX could feasibly include a hand-cranked backup system and a ladder on Starship’s exterior in the event of total system failure, but both backups would still pose risks similar to or greater than the National Team’s ladder.

However, the fact that SpaceX has already built and begun testing a Starship Moon elevator prototype makes it hard to believe that the company couldn’t ultimately produce a safe, reliable, redundant elevator between now and the mid to late 2020s.

On a separate note, it’s unclear when or where SpaceX built and tested the first Starship elevator. The photo NASA’s Mark Kirasich provider appears to show an elevator prototype situated inside a steel Starship ring with the sky visible, but nothing like that setup has been spotted at SpaceX’s Boca Chica Starship factory or former Cocoa Beach production facilities. That leaves its Hawthorne, California factory or, perhaps, a mysterious “Roberts Road” facility on Kennedy Space Center (KSC) land. Either way, it certainly appears that SpaceX has yet to show all its cards and is doing everything it can to convince NASA that Starship is worth additional HLS contracts.

NASA is expected to award contracts for full-up Moon lander demonstrations from one or two of the three candidates either “in the next few weeks” or sometime in April.