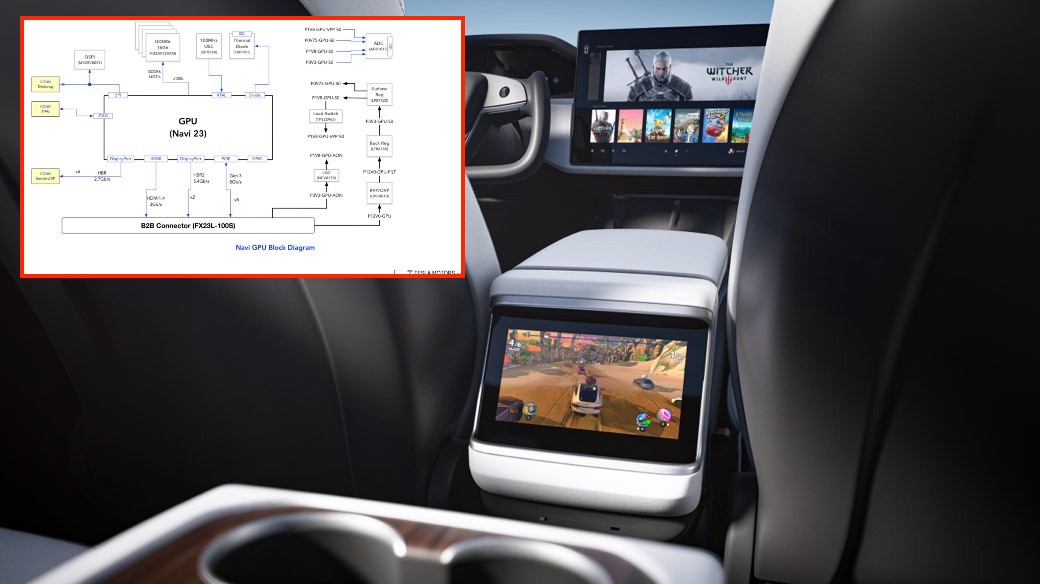 A renowned tech leaker has shared what could very well be a block diagram depicting some details of the Model S and Model X refresh’s in-car gaming system/infotainment system GPU. Based on the information presented in the leak, it appears that Tesla’s in-car gaming system would indeed be on par with some of the market’s most popular consoles.

Patrick Schur, who has made a reputation for leaking details on upcoming tech, shared the image on his Twitter page. According to the leaked block diagram, Tesla will reportedly be using an AMD Navi 23 GPU for its onboard infotainment system, which would be equipped with 16Gb (2GB) Samsung GDDR6 memory chips (K4ZAF325XM). Considering that there are four modules depicted in the leaked diagram, it appears that Tesla’s infotainment system will have 8GB of memory in total.

It should be noted that the memory is 14 Gbps and is attached to a 128-bit memory bus, which should provide a maximum bandwidth of 224 GB/s, similar to the Xbox Series S. The diagram also shows that the system offers DisplayPort and HDMI 1.4 connections along with PCIe Gen4 x8 (8Gb/s), which are connected to onboard monitors and a board-to-board (B2B) connector.

Tesla’s official webpages for the Model S and Model X refresh note that the vehicles’ in-car gaming system offers up to 10 teraflops of processing power, which is comparable to those offered by dedicated gaming consoles like the Sony PlayStation 5 and the Xbox Series X. As noted in a videocardz.com report, Tesla would have to employ 32 Compute Units of Navi 23 GPU (2048 Stream Processors) that are clocked to at least 2.44 GHz to achieve such FP32 compute power.

Quite interestingly, rumors of Tesla using the AMD Navi 23 GPU for its next-generation infotainment system have been around for some time. Last November, Schur noted on Twitter that the EV maker was looking to use the AMD Navi 23 for its vehicles’ infotainment systems. The leakster stated in a later tweet that AMD and Tesla were not too happy about the information he posted.

Overall, it appears that Elon Musk was not kidding when he noted that Teslas would be able to run top-tier games like Cyberpunk. Ten teraflops of performance and an AMD Navi 23 GPU may seem overkill for an in-car gaming and infotainment system, after all, but it does provide Tesla’s electric vehicles with enough computing power to run high-quality games. Some of these have been hinted at recently, like Witcher III, which is featured in the Model S and Model X refresh’s pages, and Cyberpunk, which Elon Musk personally mentioned on Twitter.

Don’t hesitate to contact us for news tips. Just send a message to tips@teslarati.com to give us a heads up.

The New Element Bondi Wants To Reinvent The Classic E-Scooter
Tesla Cybertruck to enter limited production this Summer
Aptera’s clever new community funding program prioritizes your SEV delivery the more you invest
EVs near a fifth of California sales: Is Tesla’s lead shrinking?
EVCS to open up its charging network through Hubject’s platform